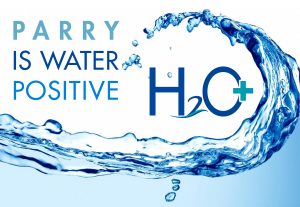 Special Report for World Water Day, March 22, 2019 —  Valensa International has announced that their parent company, EID Parry, is the first known microalgae cultivation site in the world to demonstrate they can achieve a “Water Positive” footprint, by actually putting more water into the ground than they take out while operating at-scale.

A recent report from the Parry team confirmed the ability to deliver “Water Positive” cultivation, and it certainly comes at an ideal time for World Water Day, March 22, 2019. Despite being located in an arid, remote location in India, Parry’s team created a system that maximizes water sustainability in several ways to push the water-use scale into positive, while maintaining the strictest standards for organic production. This water management solution uses rainfall collection, careful tracking and monitoring of water drawn from underground aquifers, reducing loss during post-cultivation processing, and re-using filtered and purified water. That’s another way of saying Parry’s commercial-scale microalgae cultivates the purest forms of organic Spirulina and Chlorella, while replenishing the earth with water.

“Parry worked with equipment and technology experts around the world to be able to deliver this milestone,” says Dr. Margaret Dohnalek, Chief Scientific Officer for Valensa International. “Already, the Parry team has been able to improve water filtrate quality, which will achieve a savings of 20% water usage per day, and that is an achievement in just that one part of the operation. The fundamentals of the initiative are less process loss, improved productivity and better quality filtered and purified water. And, as the Parry operation expands capacity, water usage will be optimized so that capacity can double but water usage will only grow by 50%. In essence, Parry is committed to doing more with less water. This is truly an admirable water conservation initiative.”

Add to that, the rain water capture system is directly integrated into the production flow to allow for a net-positive water balance from what is drawn from the earth.

“When you think about environmental sustainability, you think about using less. The Parry team has flipped the question and asked, how do we do more with less, and replenish at the same time,” said Dr. Dohnalek. All while quality standards for EU Organic for Parry Organic Spirulina and Parry Organic Chlorella are not compromised. In fact, Parry is exceeding the standard of many companies by delivering an Organic Spirulina that is below the threshold for polycyclic aromatic hydrocarbons (PAH) established by the European Union. “Quality, safety and a water-positive footprint – what a tremendous achievement,” she said.

According to Umasudhan C.P., Valensa International’s CEO, “Our goal for our microalgae business is to do more than just talk about sustainability, and a commitment to water conservation and the environment. Our commitment is to unlock water sustainability in a way that gives benefit for society and commercial interests in a balanced manner. What we have done,” says Uma, “is to look at water usage and microalgae production technology, and be smarter about our approach.” From rain water harvesting to sludge dewatering, water meter technology innovation, and lagoon and processing water treatment systems, Parry has created an end-to-end solution for quality, water-positive production that is world class.

Valensa International and EID Parry are proud to offer Parry Organic Spirulina and Parry Organic Chlorella that come from a commitment to a water-positive footprint. Producing quality products makes good business sense; producing them with less water insures safe drinking water and water sustainability for the community, for the growing population, and for our planet.